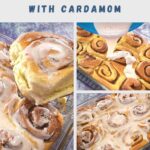 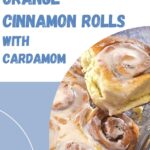 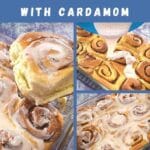 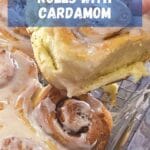 We love cinnamon rolls as most people do, but we also love different cinnamon roll variations. These Orange Cinnamon Rolls (with Cardamom) just happen to be a favorite of my husband's.

When he was growing up, Cardamom Rolls were a big part of his life. His mom and aunt made them often for him. I decided to add some orange to the cardamom to make these yummy sweet rolls.

Ingredients needed to make these rolls

Can this recipe be used to make overnight cinnamon rolls?

Yes! Once you place the sliced orange cinnamon roll dough in a baking dish, cover with plastic wrap and place in the refrigerator. In the morning, set it on the counter for an hour or two. Loosen the plastic wrap a bit. They need to come to room temperature and rise. When ready, preheat the oven to 375 degrees, and then bake the rolls for 20 - 30 minutes until golden brown.

Can I use a stand mixer instead of mixing and kneading the dough by hand?

Absolutely! I would recommend using the whisk attachment first to beat the eggs and add the liquids. Switch to the dough hook when adding and kneading the flour.

How to make Orange Cinnamon Rolls

Warm the milk slightly (I use the microwave) to take the chill off. Yeast works best in liquid that is 110F to 115F degrees. Using a thermometer to check the temperature is a good idea.

Mix the sugar and the yeast into the milk. Let the yeast activate. It will start to bubble in a few minutes.

In a large bowl beat the eggs. Add the orange juice along with the orange zest, and the melted butter. Next, mix in the yeast and milk mixture.

Sprinkle in the salt and gradually start adding the flour. I start with a couple of cups then continue to add the flour until I have a workable consistency to knead the dough.

Knead the dough for several minutes. I have done this several ways. I have kneaded it directly in the bowl, on a floured surface, or if you prefer, use a dough hook on your stand mixer.

When the dough is ready, place it in a greased bowl and set it aside to rise. In the second picture, you can see the dough has more than doubled in size. Punch down the dough and get ready to roll it out to make the rolls.

While the dough is rising, mix together the brown sugar, cinnamon, and cardamom filling. Set it aside until ready to use.

Roll out the dough on a floured surface. You want a rectangle that measures about 12" x 15". Spread softened butter over the dough and sprinkle with the cinnamon and cardamom filling. Roll up the dough.

Slice up the dough into 12 rolls. I like to cut the dough in half, then each half is cut in half again. Each quarter I cut into 3 rolls.

Place the rolls into a baking dish that has been sprayed with nonstick spray. Cover the rolls lightly with a towel or plastic wrap and let them rise until they double in size.

After the rolls have risen, bake them until golden brown. Cool slightly and prepare the glaze if you are using it. Enjoy!

Thank you for stopping by and checking out my family’s favorite recipes.

If you tried this recipe for the homemade Orange Cinnamon Rolls with Cardamom and you liked it, please use the stars on the recipe card to rate the recipe. If you have a question or suggestion about this or any other recipe, please leave a comment, and I will respond as soon as possible. 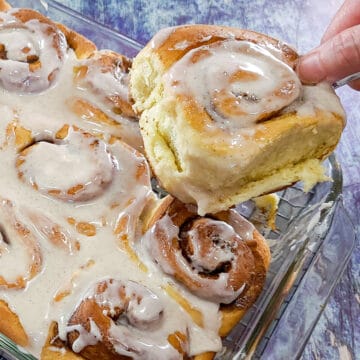 For the orange rolls

For the cinnamon and cardamom filling

For the cinnamon roll frosting

Measuring the milk and orange juice You can adjust the amount of milk you based on the amount of fresh squeezed orange juice you get from your orange(s). Both liquids together should add up to 1 cup.  To make overnight rolls... Once you place the sliced orange cinnamon rolls in a baking dish, cover with plastic wrap and place in the refrigerator. In the morning, remove and set on the counter for an hour or two. They need come to room temperature and rise. Preheat the oven to 375 degrees, and then bake the rolls for 20 - 30 minutes until golden brown. While making the glaze Start with 1 tablespoon of milk and slowly add more as needed to get a consistency for the icing as you like.
Click here to add your own private notes.